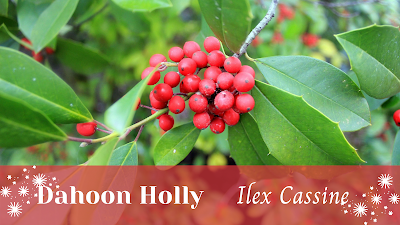 Welcome to December in Central Florida! We are finally starting to see some cooler weather and a few leaves changing colors. We are also seeing more and more red berries throughout all of our woodlands and wetlands. These red berries, more often than not, belong to any one of our 10-11 species of Holly.

The Holly Family, Aquifoliaceae, has a great reputation for being beneficial medicinally, though most species have toxic berries, so they aren’t the most edible of plants. The Ilex genus is the only genus in the family that contains around 400 species. The family name translates to “trees with needles on their leaves” which is pretty darn accurate for most species. However, the genus name is an old word for Oak. The Holly species I wanted to introduce you to today is the Dahoon Holly or Ilex cassine.

Like every species of Ilex, Dahoon Holly is dioecious, meaning that male and female flowers are on different trees. These flowers are usually really small and develop in clusters at the leaf axils. Only female plants produce the small berry-like fruits that are actually drupes. These drupes are often mistaken for berries because they contain multiple seeds where traditional drupes only contain one seed, referred to as a stone. I. cassine berries are yellow, orange, or red, the ones I find most often around here are red. This species is native and reaches about 12 meters (about 39 feet) in height. Leaves are alternate and simple, around 3-14 centimeters (1.18-5.51 inches) long and mostly oval. Some leaves have a few small teeth on their otherwise smooth margins. These plants love to have their feet damp so you can often find them in wet hammocks and flatwoods, though they can survive in dryer areas. They are often mistaken for another species of native Holly, the Yaupon Holly, Ilex vomitoria, though Yaupon Holly’s leaves are much smaller and have a much more interesting margin. There is also an invasive species that has become quite common around the area that is a major look-a-like for I. cassine, that is the Brazilian Peppertree, Schinus terebinthifolia. The most notable difference between these two is that S. terebinthifolia has pinnately compound leaves.

Here's a video going over some info about this Holly as well as a close relative in the same genus.

Edibility- The leaves can be used as a tea.

Traditional Native American Ceremonial Use- Ilex cassine is sacred to the peoples of Florida and the East Coast of North America and is used similarly to Ilex vomitoria to produce a ceremonial cleansing tea referred to as the black drink. This drink is high in caffeine (or theobromine) and causes vomiting, which is considered to be a desirable and cleansing event prior to certain ceremonies. The Apalachicola tribe of Florida prepare large quantities of I. cassine and place it in huge snail shells that are then used as offerings in rituals, where the beverage is also consumed. The shells may be beautifully engraved with mystical images and divine figures. During celebratory rituals, a great deal of tobacco is smoked alongside the drink, producing an intensely euphoric, stimulating effect. Many scholars believe that I. vomitoria was the preferred leaf for making the black drink, however I. cassine was still used. The leaves of I. cassine and I. vomitoria have also been smoked as tobacco substitutes by native tribes and settlers and were also used as tea substitutes by southern rebel troops during the American Civil War.

Tea- Dahoon Holly makes tea but it is the least recommended of all Holly teas. It can cause severe headaches, vomiting, and can be laxative when taken at larger concentrations. However, if the beverage is not brewed too long, one can enjoy the flavor, stimulating effects, and health benefits without going through a ritual purging like with the ceremonial black drink.

Caffeine vs. Theobromine- Many sources say that Dahoon Holly contains a large amount of caffeine. However, recent studies have determined that the alkaloid previously thought of as being caffeine is actually Theobromine. This is a very closely related alkaloid that has most of the same effects as caffeine and is found in cocoa.

Stimulant- Dahoon Holly tea works as a stimulant helping to improve cognitive function for a time.

Blood Pressure- Though stimulating, the leaves can have a calming effect, and they have been known to improve arterial function and blood circulation in some individuals. Theobromine has also shown cardioprotective tendencies in several studies.

Fevers and Malaria- Some compounds found in the leaves of Dahoon Holly have been known to be anti-inflammatories. This helps to support the traditional use, in some cultures, for reducing fevers and treating malaria.

Cautions, Contraindications, and Warnings- Although no specific reports of toxicity have been seen for this species, the fruits of at least some members of this genus contain saponins and are slightly toxic. They can cause vomiting, diarrhea, and stupor if eaten in quantity. There is also much caution surrounding the tea as large concentrations can induce vomiting, cause dizziness, and cause headaches. Do not use this herb if you are pregnant or breastfeeding.

I only included a basic introduction to this amazing native holly. If you have any questions or comments please leave them below. Follow me on Facebook and Instagram or updates on my adventures in Nature. Find me on YouTube and check out my videos! I also have a few things up on Teespring, check it out! Also, if you like what I do and what to see more, Become a Patron!