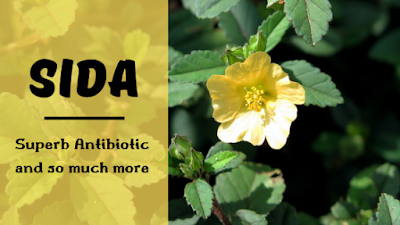 Ephedrine. It's an alkaloid that has been used medicinally for hundreds of years. Typically it's either extracted from Ephedra, a shrub that contains high amounts of ephedrine and grants it's name to the chemical, or it's synthetically produced in a lab. This alkaloid is great for a number of health problems, including bronchitis, asthma, and nasal congestion. However, with it's possible side effects and due to it's being one of the chemicals used in the production of methamphetamine, ephedrine has been strictly regulated and is mostly illegal to posses and use unless you have a prescription.

So you may have noticed that the name of this post is Sida, and you may be wondering why my opening remarks are about Ephedrine. Well, Sida contains small amounts of this alkaloid. Which makes Sida illegal to posses and use in most states, unless you are a licensed acupuncturist. While I understand the reasoning behind the regulation of ephedrine, having the regulation be so strict might be going a bit overboard. A plant like Sida, which contains a very very small amount of ephedrine, and is readily found in my front yard, cannot be harvested and used by most people because of this regulation. However, it's a common weed in my area, and is a traditional wild food. Most people who would want to harvest and use this plant are not going to harvest enough of it to be able to extract a large enough amount of ephedrine to synthesize methamphetamine. Not to mention, regulating a traditional food source can be a bit upsetting to those who still use it for food. Imagine if the government were to regulate spinach in the same fashion.

But enough about my rant, and on to the more pleasant details about this awesome little herb.


Scientific Name- Sida acuta, S. carpinifolia, S. rhombifiolia, S. cordifolia, S. spinosa, and S. tiagii. There are over 120 species world wide that have been used in a traditional sense. These are the ones that have been studied the most and who's traditional use has been verified, largely, by modern science.

Common Names- Most of the plants in the Sida genus are typically called something to do with “fanpetals.” S. spinosa is known as Prickly Fanpetals. S. cordata is called Heartleaf Fanpetals. However, most of the more medicinally useful species tend to be the exceptions. S. acuta is commonly called Wireweed, Teaweed, Ironweed, and Broomweed (it's typically used to make brooms). S. cordifolia is commonly known as Country Mallow. S. rhombifolia is Cuban Jute. If you haven't noticed yet, a lot of the names have something to do with cordage of some sort. These plants are usually used for a traditional kind of cordage just about everywhere they grow.

Parts Used- Every part of this plant is used. Most commonly, people tend to stick to the arial parts. Though that could be due to the ease of the harvest. Stephen Harrod Buhner, author of Herbal Antibiotics, states that “harvesting the root of a mature plant in this genus is as difficult as conveying to a politician the meaning of the word integrity.”

Parts Eaten- One of my favorite foragers, Green Deane, says that Sida is “barely edible.” However, I also know of several people who drink a tea made from the leaves, and cook the young leaves and flowers as a pot herb. Personally, I don't mind it as a pot herb, mixed in with other greens, and the tea is pleasant.

Ayurveda- Known as Bala in the Ayurvedic tradition, this herb balances all three doshas, but works particularly well on vata. It's beneficial to treat diarrhea, and can be described as nutritive and invigorating. It's often used to rejuvenate the nervous, circulatory, and urinary systems. It's also cooling and astringent and also used to speed the healing of wounds, reduce inflammation, and to treat bleeding disorders.

Antibiotic- Sida is a systemic antibiotic, meaning that it gets absorbed into the blood stream and circulates throughout the whole body. Sida works well to treat systemic Staph infections, infected wounds, E. coli, Listeria, Salmonella, and quite a few other bacterial infections.

Antibiotic Resistant Bacteria- MRSA has become a pretty big problem in recent years. Sida works extremely well to help treat MRSA and other resistant infections by blocking their ability to reproduce. MRSA and other resistant bacteria developed their resistance to antibiotics because of the single compound nature of the antibiotics. Herbs can sometimes prove super effective against them because they contain hundreds of compounds that the bacteria just cant seem to fight as efficiently.

Fever- The whole plant is useful to help reduce fever. It's also a great antimicrobial, so it helps fight the cause of the fever as well.

Wound Care- The juice of the roots is used to help speed the healing of wounds, but the leaf can also be used in a poultice for the same.

Digestion- Being a member of the Mallow family (Malvaceae), Sida is full of mucilage. This makes it ideal for most issues with the digestive system, helping to soothe the entire gastrointestinal (GI) tract. It's great to help relieve stomach aches, indigestion, and diarrhea.

Upper Respiratory- The ephedrine content of Sida makes is a great ally for most upper respiratory conditions, including asthma and bronchitis.

Male and Female Reproductive Uses- Soothes inflammation of the testicles. The juice of the whole plant is also used to help treat gonorrhea. It is also used to help increase the quantity and quality of sperm while helping to control the pre-ejaculation of sperm. It's also used to help stimulate the start of menses in women who are having problems with late menses. This is why it's so dangerous in the early stages of pregnancy. It has been historically used as a birth control method for this reason.

Contraindications and Warnings- This plant does contain a small amount of ephedrine, a controlled substance here in the U.S. Ephedrine has been known to increase heart rate, especially in conjunction with caffeine. This can cause some serious health problems. It can also interact with a number of medications, including steroids, beta-blockers, and MAO inhibitors. Check with your doctor before taking this herb in any quantity. Also not recommended for the early stages of pregnancy, though it can be beneficial in the final trimester. Check with your doctor or midwife before taking this herb if you are pregnant or breastfeeding. Sida also lowers blood glucose levels, so use caution if your are diabetic. Sida is also harmful to goats.


I only included a basic introduction to this amazing herb.  If you have any questions or comments, please leave them below.