Having been raised in North Florida, by a family who has been in the South for many a generation (most of us are in Georgia, Virginia, and the Carolinas), I was raised with a few Appalachian traditions. One of these traditions was “Poke Salat.” Now, my parents didn’t prepare this traditional dish, but I did hear about it quite often and some other family members did prepare it occasionally. Though it sounds like a springtime salad, it’s actually a pot of cooked greens. I promise you that if anyone ever serves you a salad and calls it Poke Salat, you should run away as fast as you can. This is because Pokeweed is highly toxic and it has to be cooked several times over in order to be edible.
Pokeweed (Phytolacca americana) is a poisonous, herbaceous plant that has long been used for food and folk medicine in parts of eastern North America, the Midwest and the Gulf Coast where it is native. Poke is a member of the Phytolaccaceae (Pokeweed) family and is a perennial herb. It grows up to 11ft tall, though the variety commonly found in the South tends to stop at 8ft. Single alternate leaves are pointed at the end with crinkled edges and an unpleasant smell. The stems are green, pink, or red. Flowers greenish-white in long clusters at ends of stems that will develop into dark purple berries resembling blueberries or elderberries. Pokeroot is best dug up in the fall after the plant has died back for the winter. This is when the plant is the most medicinal and the least toxic. The next best time to dig the roots is in the early spring when the leaves are just coming out (as long as you're sure what you're picking!). The leaves and berries are harvested from Autumn to the following Spring and can be found in North & South America, East Asia & New Zealand. Though it has become naturalized all over Europe. It’s often found on edges of fields or cleared lands and roadsides. Pokeweed poisonings were common in eastern North America during the 19th century. The roots were often mistaken for parsnip, Jerusalem artichoke, or horseradish. The berries are often mistaken for elderberries. Use caution! And remember, if you’re not 100% sure of your identification, DON’T consume/use the plant! 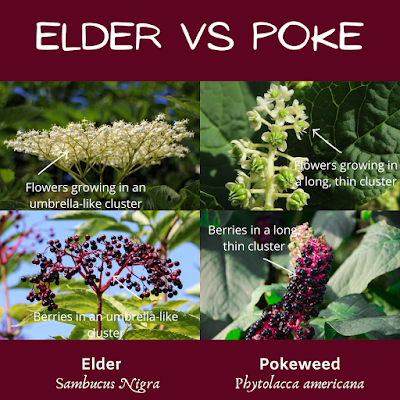 Poke is predominately toxic to mammals, though some small mammals have a resistance to the toxin. The berries are an important food source for birds and can be eaten by them because the small seeds hard outer shell simply passes through the birds' digestive system. It’s also a valuable host plant for a number of butterfly species found here in Florida.
I recently filmed a video about this beautiful plant.