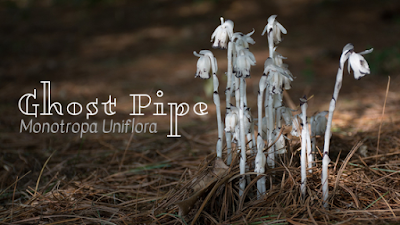 We have come, once again, to this amazing time of year. The time where the veil between the world of the living and the world of the dead is thinning. This is the time where we gather around fires, in the dark of the night, and tell stories of wonder, and more than a little bit of fright. With these stories at the forefront of my mind, I have decided to tell you about a ghastly little flower that steals it’s sustenance from unsuspecting prey. A flower so small and pale that it resembles finger bones sticking out of the soil of the forest floor. A flower that is often mistaken for a fungus. The Ghost Pipe.

Monotropa uniflora (Indian Pipe or Ghost Pipe) is a plant that does not contain chlorophyll (the chemical that makes plants green among other things), meaning that it cannot photosynthesize it’s own food. Instead, it steals it’s nutrients from mycorrhizal mushrooms. These are mushrooms that have a symbiotic relationship with certain trees, they exchange nutrients with one another. The mushrooms share with the trees, but the Ghost Pipe does not give anything back, it only takes. This makes it a parasite, not only to the fungi that it is directly stealing from, but also to the tree that is sharing it’s resources with the fungi. Indian pipe looks waxy and sometimes totally white but commonly it has black flecks and a pale pink coloration. Rare variants may have a deep red color. Indian pipe plant has a dark-colored, fibrous, perennial root, matted in masses, from which arise one or more short, ivory-white stems, 4 to 8 inches high, furnished with sessile, lanceolate, white, semi-transparent, approximate leaves or bracts, and bearing a large, white, terminal, solitary flower, which is at first nodding, like a downward facing smokers pipe, but becomes upright in fruit. The calyx is represented by two to four scale-like deciduous bracts, the lower rather distant from the corolla. The corolla is permanent, of 5 distinct, erect, fleshy petals, which are narrowed below with a small, nectariferous pit at the base. Stamens 10, sometimes 8; anthers short on the thickened apex of the hairy filament, 2-celled, opening by transverse chinks. Stigma 5-crenate, depressed, and beardless. Pod or capsule 5-celled and 5-valved; the seeds numerous, and invested with an arillus-like membrane. The plant is found growing in complete shade on stable forest floors, usually where green plants do not. It prefers Rich, moist soil, or soil composed, of decayed wood and leaves, and near the base of trees. Because of it’s feeding tendencies, and dependence on mycorrhizal mushrooms as well as their host trees, this plant is virtually impossible to cultivate.

There is a Cherokee legend about the Indian pipe: Long ago, when selfishness first entered the world, people began quarreling, first with their own families and tribal members, and then with other tribes. The chiefs of the several tribes met together to try to solve the problem of quarreling. They smoked a peace pipe together, while continuing to quarrel among themselves for the next seven days and seven nights. In punishment for smoking the peace pipe before actually making peace, the Great Spirit turned the chiefs into gray flowers and made them grow where relatives and friends had quarreled.

Edibility- The whole plant can be cooked. It is tasteless if eaten raw, but has a taste like asparagus when it is cooked.

Traditional Native American Uses- Indian Pipe has profound Spiritual meanings as well as Medicinal uses for most Native American Tribes. The appearance of white animals and plants often have a major impact, and all the tribes hold a special reverence for them. In addition to the Spiritual impact, Ghost Pipe also is a major healing herb. Both for the physical and emotional aspects of healing. Some of the more traditional uses were treat West Nile Virus and Malaria, as an extremely potent nervine often used to treat seizure disorders, convulsions, insomnia, mental health disorders, severe stress and anxiety, and chronic muscle spasms.

Eye Inflammation and Conditions- This plant was used by some native North American Indian tribes to treat eye problems, the stem was bruised and the clear fluid of the stems applied to the eyes. It’s still used for eye issues today, mainly the juice of the plant is mixed with Rose Water and applied to inflamed eyes to reduce the swelling.

Emotional Pain and PTSD- Ghost Pipe has been shown to be effective in treating severe mental and emotional pain due to PTSD and other traumatic injury. It has also been used in cases of acute anxiety and/or psychotic episodes due to intense drug experiences.

Colds and Fever- An infusion of the leaves has been used to treat colds and fevers.

Convulsions, Fits, and Epilepsy- A tea made from the root has been used for convulsions, fits, epilepsy, and as a sedative. Roots also have antispasmodic properties. This has been a traditional treatment for people of all ages, including children, who suffer from convulsions, fits, and epilepsy.

Physical Pain- Ghost Pipe helps relieve skeletal tension associated with migraines and neck pain, as well as sharp, shooting pains associated with pinched nerves. Corpse Plant is often used to help people suffering from severe pain caused by Lyme Disease. This herb might me most effective in cases when there is an element of emotional pain along with the physical.

Cautions, Contraindications, and Warnings- The plant contains several glycosides and is possibly toxic.

I only included a basic introduction to this ghastly wonder. If you have any questions or comments please leave them below. Follow me on Facebook and Instagram or updates on my adventures in Nature. Find me on YouTube and check out my videos! I also have a few things up on Teespring, check it out! Also, if you like what I do and what to see more, Become a Patron!