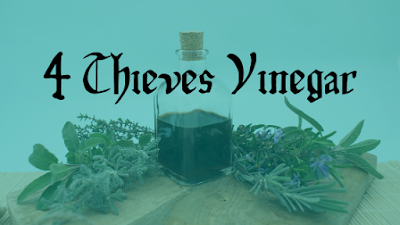 What Is Four Thieves Vinegar?: A vinegar based tincture of herbs thought to cure, treat, and/or prevent the Bubonic plague. In modern day, it’s used to boost the immune system, repel insects (including the fleas that spread the plague), and as a condiment.

A Little History: There are a number of different versions of the origin of this traditional remedy, but they all share the same basic points. I’ll summarize them here. When the Bubonic plague was sweeping through Europe, there arose a group of grave robbers and thieves that covered their bodies and doused their face masks in an herbal vinegar with strong antibacterial and antiviral properties in order to keep themselves from contracting the plague. Initially no one worried about the grave robbers and thieves who stole into the houses in the dark of moonless nights to rob victims of the Black Death as, the townspeople assumed, the plague would inevitably infect and kill the thieves, too. But it didn’t. The thieves continued to assail the homes and graves of the dead with impunity until they were finally caught in the middle of their act, tried, and set to be burned at the stake. Astonished by the thieves’ immunity and seemingly indifferent attitude toward the plague that devastated the community so severely, the judges offered the thieves a bargain: in exchange for releasing the cause of their immunity, the thieves would be hanged instead of burned at the stake – a less brutal and more quick end. The thieves acquiesced and surrendered the recipe for their elixir, and the legend has continued to grow since then.

What Is That Recipe?: No one really knows the original recipe, and many recipes for Four Thieves Vinegar abound. Though a recipe written by Jean Valnet, a renowned aromatherapist and herbalist of the early 20th century, may resemble the original more closely than any other. He calls for vinegar, wormwood, meadow sweet, juniper, marjoram, sage, cloves, horse heal, angelica, rosemary, horehound and camphor. Valnet calls for steeping these herbs in vinegar for six weeks before decanting, for a lighter flavor some people only steep the herbs for only seven days.

Does It Work?:  While this traditional remedy may or may not have helped grave robbers and thieves to stave off the plague that ravaged Europe centuries ago, it seems modern herbalists and gardeners have revived the interest in this garden remedy. Many herbalists use it as a cleansing agent – transferring it to a spray bottle and using it to clean and sterilize kitchen counters or bathrooms; indeed, many of the herbs possess strong antimicrobial effects and vinegar, in any case, makes an excellent natural cleanser. Others recommend using Four Thieves Vinegar in personal care, diluted with water of course, as a cleansing agent for the skin or as an astringent. Among neo-Pagan circles, Four Thieves Vinegar is thought to have protective qualities and some swear that if you dress your doorstep with the vinegar, it’ll keep your enemies away. As to preventing the Plague, many people attribute it’s abilities to a combination of the immune boosting, antiviral, and antibacterial properties of the herbs and the bonus fact that many of the herbs used in the recipes also drive away pests such as fleas, which are the currently known way that the plague is spread.

The Basics of The Recipe: Really and truly, there are so many versions of this recipe that you can customize it almost endlessly. All you need to do is use a good quality Apple Cider Vinegar as your base (though some recipes call for other vinegars, I think this one has the most antibacterial and beneficial qualities), crush up a few cloves of garlic (crushing the garlic releases the antibacterial properties, though you may notice that your garlic turns blue after a few days in the vinegar, this is a natural process and does not indicate it’s gone bad), and throw in a handful of herbs. Herbs that are traditionally used include lavender, rosemary, mint, sage, marjoram, anise hyssop, wormwood, meadow sweet, juniper, cloves, horse heal, angelica, horehound, camphor, thyme, black pepper, cinnamon, rue, cayenne, chili pepper, coriander, plantain, and lemon balm. Though I’m sure there are more herbs that could be used. Some people recommend using only 4 herbs, one for each thief, and others just throw in however many they feel like using.

Instructions:
Toss herbs and garlic together in a one-quart mason jar, cover with vinegar and place them in a cool, dark location. After a minimum of seven days (you get more medicinal benefits after 6 weeks), strain the vinegar through a fine-mesh sieve into a second, clean 1-quart glass jar.


Some Ideas for Variations: In all these variations use 4-8 cloves of garlic, 4 cups of apple cider vinegar, and equal portions of the suggested herbs.
A Bitter Formula: Wormwood, Rue, Anise Hyssop, and Juniper
(this recipe would be great for your digestion, take a dropperful 15 minutes before eating
to improve digestion and prevent stomach problems)
A Great Salad Dressing: Lemon Balm, Thyme, Rosemary, and Coriander
(this recipe tastes great and is also good for digestion)
A Spicy Adventure: Cayenne, Chili Pepper, and Black Pepper
(this recipe will help clear upper respiratory illness, break fever, and makes a great marinade)


You can also feel free to add in any herbs you may feel like. Elderberry or Hibiscus may be beneficial to the formula, adding in extra immune boosting properties. Hawthorne and ginger may help to improve heart health. Mix up your own recipe, try new formulas. Feel free to post any questions, comments, and/or observations in the comments down below. Follow me on Facebook and Instagram or updates on my adventures in Nature. Find me on YouTube and check out my videos! I also have a few things up on Teespring, check it out! Also, if you like what I do and what to see more, Become a Patron!