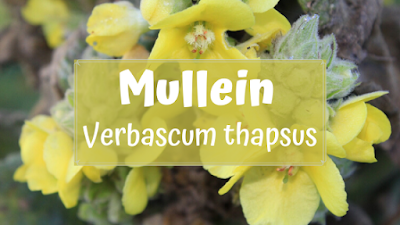 Today I thought I’d share with you a plant that is fairly famous in the herbal world, and infamous in the world of ecology. Mullein has a number of medicinal uses, and is an herb I call on for many issues in my home. However, it’s invasive as heck and has a tendency to disrupt a number of native habitats here in the US. It was brought over here, from Europe, by the settlers. Likely due to a combination of it’s usefulness in a number of medicinal complaints, and it’s folk use as an herb for protection from evil spirits. Of course, since it spreads fast and likes to follow people around, the Native American tribes picked up on the uses for this plant. However, there is a debate on whether the Native Americans learned of these uses from the settlers, or vice versa. Likely, there was a fairly even exchange going both ways, especially since we know the settlers rarely used the roots, but a number of Native Americans used the root quite often. However, I’m going to take us back to the folk uses for a brief tangent. Mullein was always considered by the ancients as a plant of protection from dark forces. It was the plant Ulysses took with him on his famous sea voyage to protect himself from the enchantress Circe. In India mullein is considered a safeguard against evil spirits. Medieval Europeans dipped the plant in suet and used it as a torch during ceremonies or when overcoming the presumed evil. Later, the European settlers would wear the leaves around their wrists and ankles to protect themselves from the evil winds that carried diseases such as malaria.

Mullein, Verbascum thapsus, is a plant in the Scrophulariaceae family, or the Figwort family. This family is closely related to the Mint family, or Lamiaceae, and shares some of the characteristics such as square stems and opposite leaves. However, when the leaves are crushed you will not notice a strong scent, or really much of any scent at all. First-year plants form a rosette of large, velvety leaves up to 1 foot long. These rosettes can grow up to 3 feet tall. In the second year, a velvety flower spike grows to 8 feet tall. The stalk has alternate leaves that clasp the stem, a nifty arrangement that directs rainwater down the stem to the roots. From June to September, five-petaled yellow flowers bloom randomly in the dense, club-shaped terminal cluster. The three upper stamens, which are short and woolly, contain a sap that lures insects to the plant. The two lower stamens, which are longer and smooth, produce the pollen that fertilizes the flower. Mullein is a widely distributed plant, being found all over Europe and in temperate Asia as far as the Himalayas, and in North America. However, it is native to Europe, North Africa, and Asia, with highest species diversity in the Mediterranean. It is invasive in this country, which is good news for herbalists who can harvest and use as much as they want want. Usually I caution to not take all of a plant to preserve the native habitat, but in this case over harvesting will help preserve the native habitat (in the US)! While we’re on the topic of harvesting, many herbalists harvest the leaves in first year only, but as long as you harvest the leaves before any flowers bloom it should be just as potent, and you can still get benefit from the leaves throughout the life of the plant, as long as they’re not brown. The thought process behind this is that when the flowers bloom, all the energy of the plant is focused in those flowers. This reduces potency in other parts of the plant.

If you take a close look at this plant, and think about the doctrine of signatures, you’ll notice little hairs on leaves that resemble the cilia of the lungs. This points to the main use of this herb, for upper respiratory complaints and infections. Mullein soothes the mucus membranes, cilia, and inflamed tissues in the respiratory tract. It’s also a great antibacterial and antiviral herb, which helps to fight those kinds of infections along the way. Those hairs also help the leaf to be fairly soft and absorbent, making them great to use, in an emergency, as bandages, toilet paper, and diapers. Though you may want to do a spot test to make sure those hairs aren’t going to irritate your skin.

One of the YouTube channels I follow is full of great herbal information. Check out Herbal Jedi and see what Yarrow Willard has to say about Mullein.

Edibility- Considered to be inedible, but it’s not toxic.

Traditional Native American Uses- Some Native Americans also used the plant’s roots. The Creek Indians drank a decoction of the roots for coughs; other tribes smoked the roots or dried leaves to treat asthma. Some tribes also made necklaces, from the dried roots, for teething babies. The Cherokee rubbed mullein leaves in their armpits to treat “prickly rash.” Leaf poultices were used to treat bruises, tumors, rheumatic pains and hemorrhoids. Mullein flower oil (made by steeping the flowers in warm olive oil) also has been used for treating hemorrhoids, as well as earaches. Menominee tribe smoked the pulverized dried roots for respiratory complaints. The Mohgans smoked it to relieve asthma.

Smoking Herb- A number of Native American tribes would smoke Mullein after having smoked a bit too much tobacco, to help the lungs recover. It’s also a good smoking herb to help reduce smoker’s cough, that dry and raspy cough. Some other herbs, like coltsfoot, can be added to the smoking blend to help soothe the irritated tissues of the respiratory tract as well. If you don’t want to smoke it, try burning it as an incense.

Flower Essence- Used for those who have difficulty hearing their inner voice. Those with a weak moral fiber, often leading to confusion and indecisiveness. Those who use lies or deception with themselves and others. Mullein flower essence relates to men who are searching for true intimacy and security in expressing a soft, gentle, humble nature, or for women who want to strengthen yet soften their masculine nature. Mullein flower essence also helps soften the edges of people who have become hardened by events in their life.

Upper Respiratory, Cold, & Flu- Mullein tea is most well known for relieving the symptoms of asthma and soothing the mucus membranes of the respiratory tract. The flowers and leaves are used for treating a wide range of respiratory ailments, such as cold and flu, tuberculosis, bronchitis, pneumonia, asthma, tonsillitis, and tracheitis. It also has antiviral and antibacterial properties that make it perfect for treating those infections. Mullien mixed with horehound, coltsfoot, and lobelia makes a great tea for most upper respiratory conditions.

Ear Infections- Tea made from the leaves, and flower infused oil are traditional ear infection treatments. The oil seems to be the most potent, particularly when accompanied with a gentle lymphatic massage around the ear and along the jawline. Adding other herbs, such as Garlic or St. John’s Wort, can help improve the effectiveness of Mullein oil as well.

Lymphatic System- Mullein leaves or flowers can be applied as a compress to any instance of glandular swelling. Mullein leaves be made into a strong decoction, then that water can be used to wet more leaves that then can applied externally over any glandular swelling. A decoction of the root can also be taken internally to help improve the overall function of the lymphatic system.

Urinary System- Mullein root is excellent remedy for treating urinary incontinence and loss of urinary control due to a swollen prostate because it tones and strengthens the trigone sphincter at the base of the bladder. Mullein root also has mild astringent properties which reduce inflammation in the mucosa of the bladder. It does not irritate or over stimulate bladder or kidney function. Mullein root can be used as a long term tonic for individuals with urinary incontinence, recurring bladder infections, interstitial cystitis, and benign prostatic hypertrophy (BPH). A tea made from the leaves can also help to strengthen the bladder, remove toxins from the kidneys, and improve overall urinary function.

Bruises, Burns, & Skin Conditions- Mullein leaves possesses anti-inflammatory properties that help treat skin problems. You can also use the flowers, infused in oil, to get relief from a variety of skin infections, eczema, and other inflammatory skin conditions. Boil the leaves, just until tender, and spread the leaf onto burns, bruises, sores, and wounds to help reduce inflammation, protect against infection, and soothe any aches.

Hyperthyroidism- Some evidence suggests that intake of mullein tea may improve thyroid-related problems. The tea may help treat hypothyroidism (an overactive thyroid gland). A formula created by a noted doctor had mullein as one of its constituents. This formula was specifically targeted to treat thyroid issues. However, more research is needed.

Domestic & Practical Uses- A yellow dye extracted from the flowers has been used since Roman times as a hair rinse as well as to dye cloth. The whole plant can be used to make torches, and the flower stalks have traditionally been coated with tallow and made into candle wicks. The dried leaves and stalk are also useful as tinder and fire-starters. The leaves are soft and absorbent so they can be used as makeshift bandages and toilet paper.

Cautions, Contraindications, and Warnings- Mullein is widely considered safe. This herb may cause skin irritation for some people, so be sure to exercise caution if you’re handling the herb directly, and the tiny hairs of the plant can also irritate your throat and other mucus membranes. It’s a good idea to see how you react to a small amount of mullein before consuming it or smearing it on your body. And always strain the tea thoroughly to remove any stray hairs. This herb also has several drug interactions, so please consult your doctor before adding this to your daily routine.


I only included a basic introduction to this wonderful Florida native. If you have any questions or comments please leave them below. Follow me on Facebook and Instagram or updates on my adventures in Nature. Find me on YouTube and check out my videos! I also have a few things up on Teespring, check it out! Also, if you like what I do and what to see more, Become a Patron!

What is Mullein Tea? Benefits, Side Effects, and More: Healthline: https://www.healthline.com/nutrition/mullein-tea