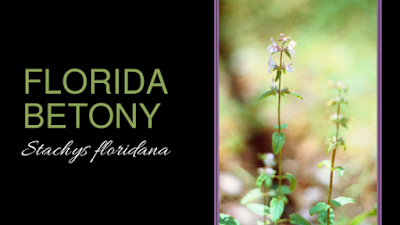 Alright. It’s time for a soapbox. The word “invasive.”

I hear people use the word “invasive” all the time. In most cases, it’s used correctly. However, there are several plants where it is definitely NOT used correctly. If you live in Florida, and use this word to describe Florida Betony, you are not using the word in the correct manner.

You see, Florida Betony, Stachys floridana, is native to Florida, and until it was moved to other Southeastern states during the 1940s or 1950s (in nursery containers), it was endemic to Florida (meaning it was ONLY found in Florida). Thanks to those accidental volunteers in nursery containers, it is now found from Texas to North Carolina. So if you live anywhere but Florida, and you’re referring to this plant, feel free to keep calling it invasive. However, those of us in Florida should refrain from describing such a lovely little native as invasive.

You see, this is one of my favorite natives. And yes, it is quite tenacious and will take over your lovely garden beds. But I welcome it into mine. It’s absolutely delicious and one of my favorite wild edibles. However, it’s also a great herb to get to know for it’s medicinal properties as well.

Wood Betony, Stachys officinalis, is a very very close cousin to Stachys floridana, and the two plants can be used, mostly, interchangeably. The main difference is that our little Betony doesn’t pack quite the punch that Wood Betony does. However, for centuries Wood Betony was thought to be the best herb to use in almost every situation. The people of ancient Greece felt this plant was more important than clothing. They thought it could cure at least 47 disease states and even had magical powers to keep away evil spirits. These beliefs held on through the Roman Empire and into the Middle Ages where both men and women wore betony amulets to ward off evil. Some claim the name Betony derives from the Celtic word bewton (“good for the head”), referring to its use for cerebral afflictions, such as headaches, nervousness and even hangovers. The herb’s reputation for healing continued well into the 17th century, when Betony was used to treat asthma, bronchitis, kidney problems, excess sweating and to purge the body of worms. In the Middle Ages, it was also the principal remedy used to exercise demons.

Stachys floridana is an aggressive, perennial herb typically found in lawns, gardens, and landscapes. It has been called wild artichoke, but it is not related to the artichoke, it is actually a member of the Mint or Lamiaceae family. This plant produces quite a few seeds, but it’s main means of reproduction is by rhizomes and tubers, which is why it’s so hard to eradicate from gardens. Small segments of these rhizomes can sprout into new plants or the tuber may be transported to a new area. The only real way to control this plant in your garden is hand-pulling, with careful removal of all the tubers. The plants are characterized by hairy, erect stems reaching 19 inches high that are square in cross-section with flowers in long clusters, heads, or interrupted whorls on the stem. The distinctive pale-colored tuber is segmented in such a way that it resembles the rattle on the tail of a rattlesnake (or a grub), hence the common name of Rattlesnake Weed. The oppositely arranged leaves have blades up to 2 inches long. Flowers grow in clusters of 3 to 6 from the upper leaf axils. The tubular, hairy calyx of sepals has pointed lobes. The two-lipped corolla is up to a 1/2 inch long and white to pink with purple spots. The fruit is a schizocarp less than an inch long that splits in half.

As I mentioned above, this is one of my favorite wild edibles. The leaves are slightly bitter, but when mixed with other fresh greens, can make a pleasant salad. The flowers are also edible and tasty. However, the tastiest part of this plant is the tuber. It’s mild and earthy, crunchy, and reminds me of a mild radish or even water chestnut. I’m also not the only person to think this way. Another close relative, Stachys affinis or Crosnes, is famous for it’s tubers and those tubers can fetch the hefty price of $150.00 per pound. There’s a great little write-up and recipe for them here. Now, our little Betony may not fetch that high of a price, but I find them super delicious. I toss them into a surprisingly large number of dishes, from salads to soups, sauteed up with a little butter and/or olive oil, yum. But my favorite way to eat them is pickled. They make a great little refrigerator pickle, just add some seasoning and some vinegar and plop them in the fridge. Or you can ferment them. Here’s a post I made on Fermented Lemons a while back. Just substitute the tubers for the lemons, or get really crazy and try both in the same jar! 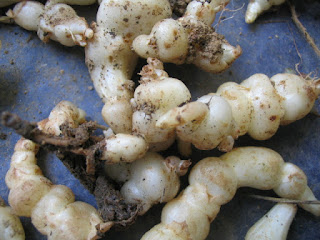 Here's a video where you can see this great plant in the wild!

Edibility- The whole plant is edible, but the root is a choice edible.

Upper Respiratory, Cold, & Flu- A tea or tincture made from the leaves of this mint, not only tastes wonderful, but can help to soothe a sore throat, open up blocked airways, and fight mild fevers.

Headaches- Much like it’s close cousin, Florida Betony can be used to ease headaches, especially headaches accompanied by anxiety or digestive upset. It also has been shown to be effective in some migraine cases, but not as potent as it’s cousin, Wood Betony.

Anxiety, Sleep, and Psychological Health- Wood Betony has historically been used as a remedy for all “head” related conditions. It’s cousin, Florida Betony, can be used in much the same way. It helps to calm anxiety, for which I’d recommend a tea as the act of brewing the tea itself can be soothing as well. It is also a great nervous system tonic, helping to soothe frayed nerves. In many cases, it’s also a mild sedative, especially when the sleepless condition is brought about from anxiety and/or over-thinking.

Panacea- This little herb can be used in just about any herbal formula. It’s helpful to each and every system of the body, and especially to the nervous system. This makes it a great herb to get to know. Historically it was used as a panacea (all heal, or cure-all), and it’s close cousin Wood Betony was even used as such in ancient Greece, where it was known to treat over 47 different maladies.

Skin & Wound Care- The astringent properties of this little herb, especially combined with the antimicrobial properties, make it a wonderful choice for skin and wound care. Not only will it help to cleanse any minor wounds you have, it’ll encourage your skin to heal. A strong tea may also make a great face wash for acne.

Digestive System- Florida Betony can be used to help reduce any ulcers. It’s also a great herb to help treat diarrhea. But this is also where the roots shine. The tubers are delicious, and this alone is a great reason to eat them, but they also are a wonderful prebiotic food. This means that the fibers are not fully digestible, but they are a great food source for beneficial bacteria. Consuming Betony tubers can promote the over-all health of your gut flora which is a great benefit for your whole body.

Cautions, Contraindications, and Warnings- Florida Betony is considered to be a safe herb to use, even in substantial doses, for the young or old, and during pregnancy or breastfeeding.

I only included a basic introduction to this delicious and usevul Florida native. If you have any questions or comments please leave them below. Follow me on Facebook and Instagram or updates on my adventures in Nature. Find me on YouTube and check out my videos! I also have a few things up on Teespring, check it out! Also, if you like what I do and what to see more, Become a Patron!

Plant of the Month- Florida Betony: The Florida School of Holistic Living: https://www.holisticlivingschool.org/plant-of-the-month-florida-betony/