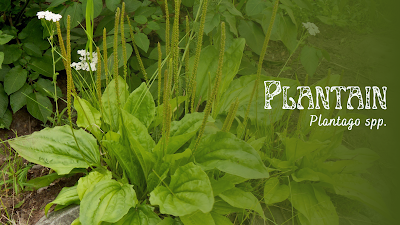 Certain herbs have a rich history full of uses and traditions. Plantain is one such plant. No, I’m not talking about the savory banana often eaten in Hispanic cuisine. I’m talking about a plant that likes to grow where people travel, a plant that has gained a reputation across the world as one of the most useful herbs you can learn. This plant is one of my favorites and every species I’ve encountered (or simply read of) can be used/eaten in multiple ways.

Plantago spp. is known in every culture for being a great medicinal herb and food source, not just for humanity but also for wildlife. There are over 35 species in North America alone, several of these are natives, and there are about 200 total species worldwide. It was a sacred plant to the Norse people who considered it one of the 9 herbs of Odin. They commonly called it Mother of Herbs or Wegbrade (translated to Wayfare’s Plant, referencing its tendency to grow by roadsides). When the Europeans settled in North America, they brought with them P. major which grew around every settlement and was so weedy that the Native American people called it White Man’s Foot. The native P. virginica was also nicknamed Little White Man’s Foot for the same tendencies. Plantain and people have a long history of mutual acceptance and use.

There are quite a few species, but they all share a few common traits that can help you identify Plantago. The leaves grow in a basil rosette pattern and have parallel veins. They are also sessile, growing along the ground, and have poorly defined petioles. If you break open the leaves, the veins will have stretchy cords. The flowers grow in a stalk and can be a short cone or a long spike, they are not very showy as they are wind-pollinated. Most are herbaceous plants, though a few are subshrubs growing to 60 cm (24 in) tall.

Scientific Name- Plantago spp. All species of Plantago (that I am aware of) can be used interchangeably. Some commonly used species include: Plantago cordata, P. lanceolata, P. major, P. rugelii, and P. virginica.

Edibility- Choice Edible. The whole plant is edible raw or cooked but be cautious as high doses of certain species can have laxative effects. Fresh, young leaves should be harvested in early spring while they’re still tender enough to eat raw in salads. Older leaves get stringy and tough, so they are better cooked. Steaming tougher leaves will make them tender, but the fibrous veins and midribs will need to be removed from older, stringier leaves. The young seed heads can be gathered throughout the summer and used in stir-fry, though as they get older, they get tough and are not recommended to be eaten. The seeds can be ground into a flour and used to make pancakes.

Traditional Chinese Medicine (TCM)- Known as Che Qian Zi (roughly translated as “before the cart seeds”), Plantain has a long history of use in Traditional Chinese Medicine (TCM). In most traditions, the leaf of this herb is the primary part used, however in TCM, it’s primarily the seeds that are used. Plantain works best on the Bladder, Kidney, Lung, and Liver meridians. It’s useful for draining damp, promoting urination, regulating water, and clearing heat. This makes it useful for reducing edema and other conditions involving damp heat, especially in the Lower Jiao (think diarrhea or urinary incontinence). It’s also used for eye conditions due to Liver Heat or Liver Yang rising (dry eyes, sensitivity to light, etc). It also clears Lung Heat (dissolves phlegm, stops cough, and as an expectorant).

Native American Traditional Uses- Various species of Plantain have been traditionally used by Native American tribes as a choice edible and for medicinal uses. In addition to its many traditional edible and medicinal uses, Plantain was sometimes used ceremonially. P. virginica was used by the Kiowa who made wreaths from it that old men would wear during certain dances as a symbol of their good health.

Skin Conditions & Wound Care- All Plantago species can be used for wound care, though the one with the strongest wound care abilities is P. major. These herbs have been used for centuries as first-aid and to help improve certain skin conditions such as eczema and psoriasis. The fresh leaves or juice of the plant are excellent, quick healing agents for cuts, wounds, bruises, and any skin related condition. The antimicrobial properties make this a great plant to help protect wounds as well as to help treat acne and boils. The seed and/or root of the plant is traditionally roasted and ground to be used to stop bleeding.

Drawing Herb- Plantain is a drawing herb, meaning that it helps to draw foreign substances out of our bodies. P. virginica is especially great for this use, though all species have this property. Common uses of drawing herbs include drawing out bee stingers and splinters, bringing infections closer to the surface so they can be drained (think boils and bad acne), and helping to remove venom from animal/insect bites and stings (such as snake bites, great to know about in Florida though you still want to head to the hospital ASAP for antivenom!).

Mucus Membrane Tonic- Plantain is an astringent and has alterative properties internally, especially in chronic inflammatory conditions of the mucosa. These properties are beneficial throughout the entire mucosa, from mouth to anus.

Cough, Throat, & Lower Respiratory- All Plantago species can be used internally as an expectorant and to soothe the throat, however P. lanceolata is the species that tends to be most effective as a gentle soothing expectorant and most indicated in irritated coughs and mild bronchitis. The mucilage from the leaves has a soothing and anti-inflammatory effect on the lower respiratory tract.

Neurological Conditions- Traditionally used in Persian medicine for neurological issues such as epilepsy. Traditional Persian medicinal preparation called Adasiyyat was used to treat epilepsy and earaches caused by nervous pain. Adasiyyat is a combination of cooked lentils with plantain leaves and was either consumed as a food or used as a plaster on the forehead. This use has been studied in modern medical science, which has determined that Plantain effects the gamma-aminobutyric acid (GABA) system and can potentially reduce the instance of seizures. GABA is a neurotransmitter and helps regulate the communication between brain cells. This property of Plantain may have further effects on other neurological conditions, but further studies are needed.

Gastrointestinal- Plantain is a great herb for the gastrointestinal (GI) tract. It has properties that help protect against the formation of ulcers, it’s a great source of fiber that helps to move digested food more effectively, it helps prevent and treat diarrhea, and it even helps remove obstructions in the liver ducts.

Cautions, Contraindications, and Warnings- None known. *Some species are endangered or threatened, please be respectful of natural populations of these plants.

I only included a basic introduction to this extremely useful plant. If you have any questions or comments, please leave them below. Follow me on Facebook and Instagram or updates on my adventures in Nature. Find me on YouTube and check out my videos! I also have a few things up on Teespring, check it out! Also, if you like what I do and what to see more, Become a Patron!