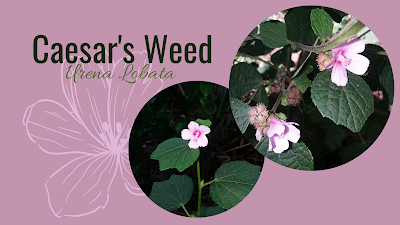 Some plants are a delight to encounter on a hike, and others are not so much. This plant is easy to find year-round in Florida and is definitely more on the annoying side of things. The burrs found on this plant seem to attach to everything and are extremely difficult to remove, the leaves have the texture of sandpaper, and it can be found just about everywhere. However, the small flowers are very beautiful and are about the only redeeming thing this plant has going for it. The flowers and the medicinal uses.

Caesar’s Weed, Urena lobata, is a member of the Mallow family (Malvaceae). In Florida, it’s classified as a Class I Invasive. The original distribution range of U. lobata is not well known, but it is probably Asiatic though authors suggest Africa as its native range. Currently, this species has a pan-tropical distribution, and it can be found growing throughout moist tropical and subtropical regions of the world including Asia, tropical Africa, Australia, North, Central and South America, the West Indies and a smattering of islands in the Pacific. It was brought to Florida in the late 1800’s, some time before 1882, as a cash crop.

It is a branched shrub 0.6 to 2.5 meters high. This plant is exceedingly variable and more or less hairy, stems often have reddish branches. Leaves are pale beneath, ovate to suborbicular, 3 to 9 centimeters long, heart-shaped at the base, more or less toothed or somewhat lobed or angled, the lobes not exceeding beyond the middle of the leaf and the sinuses being usually broad and acute, leading the leaves to resemble shields. Flowers are pink or purplish, about 1.7 millimeters in diameter and borne singly in the axils of the leaves, or somewhat in panicles. Petals are 5, free above, connate below and adnate to staminal tube; staminal tube truncate or minutely toothed, anthers many. Ovary is 5-celled, branches of stigma 10. Fruits are rounded but flattened and about 7 millimeters in diameter, with the 5 carpels covered with short, barbed spines.

Like it’s fellow Mallows, this plant has many medicinal and edible uses. Though it’s considered a famine food, meaning that it’s edible but not desirable. And rightfully so as the leaves have the texture of sandpaper and that texture remains even after cooking. This texture is attributed to the “stellate trichomes” which are star-shaped plant hairs that cover the leaves and are especially prevalent on the bottom of the leaves. This is also probably why cattle, which have only lower teeth, won’t eat it.

Edibility- Famine food. Technically the leaves are edible, but the texture leaves a lot to be desired (it’s almost like eating sandpaper). The flowers are much more tolerable than the rest of the plant, though they’re small and tasteless. The seeds can be added to soups and stews, they have a mucilaginous texture, similar to okra.

Fevers- This plant is traditionally used to treat high fevers and associated sickness, such as malaria and pneumonia.

Anti-inflammatory- A decoction from the leaves and roots is drunk to relieve pains all over the body due to excessive exertion. This decoction is said to be 86 percent as effective as aspirin and when it’s an especially strong decoction it is used for inflamed and aching joints.

First-Aid and Wound Care- The whole plant is macerated and used externally for treating fractures, wounds, mastitis, and snake bites. The leaves are specifically good for sprains and bruises.

Gastrointestinal Uses- The juice of the leaves or roots is used widely to treat bowel complaints, especially colic, stomach-ache, diarrhea, and dysentery. In Indonesia and Zanzibar, a decoction of the root is a common treatment for indigestion.

Sore Throat and Cough- The flowers are used as a pectoral and expectorant in dry coughs. A decoction of the roots is a traditional remedy for tonsillitis.

Childbirth- In many traditional medicines, the leaves, or the juice from the leaves, are used to induce labor and ease difficult childbirth. In Kenya, the Sabaots of Mt. Elgon chew boiled roots to ease delivery of afterbirth.

Other Uses- In tropical Africa, Madagascar, Cuba and Brazil, the bast fiber from U. lobata is widely used as a local source of cordage and coarse textiles. Industrially it is used as a substitute for jute where it is made into sacks, carpets, cordage, and upholstery. It is also used mixed with jute. In South-East Asia U. lobata serves for making string, twines, and ropes. In northern Thailand it is a source of fiber for the hill tribes. In Indramayu (West Java) at the beginning of the 20th Century sacks and mats were made of fiber from wild U. lobata. The fiber of this plant can be made into strong paper and whole plant cuttings can be pulped as well. It was originally brought to Florida, as a potential cash crop, in the late 1800’s. It escaped cultivation around 1897 and has since been classified as an invasive species in this state.

Cautions, Contraindications, and Warnings- Medicinal amounts of this plant should not be taken internally when pregnant or breastfeeding. Since this plant has some hypoglycemic effects, those on diabetic medications should consult their doctor before adding it to their routine.

I only included a basic introduction to this interesting herb. If you have any questions or comments, please leave them below. Follow me on Facebook and Instagram or updates on my adventures in Nature. Find me on YouTube and check out my videos! I also have a few things up on Teespring, check it out! Also, if you like what I do and what to see more, Become a Patron!